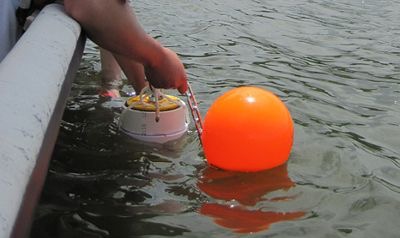 EPA researcher Jake Beaulieu spends a lot of his time on the water, especially at Harsha Lake, a reservoir just southeast of Cincinnati, OH. He’s not a sailor, nor does he work with marine life. Instead, Beaulieu studies how methane (CH4)—a less discussed but more powerful greenhouse gas than carbon dioxide—is emitted from reservoirs. He and other EPA researchers are developing new models and tools to improve methane emission estimates in reservoirs and our understanding of their contributions to greenhouse gas levels globally.

Methane gas contributes to rising temperatures and one way it is produced is by tiny organisms in sediments at the bottom of lakes. One important source of food for these organisms is decaying algae, which is converted to methane when eaten by these tiny organisms.

According to Beaulieu, the way that methane emission rates from reservoirs are currently estimated doesn’t take into account a number of factors that can affect how much is emitted into the atmosphere such as the location, water depth, overall size of the reservoir and other conditions.

One of the main ways that large amounts of methane are released from reservoirs is through something called ebullition—or more simply, the bubbles that come up from the mud. The bubbles are filled with methane, and Beaulieu’s research has shown that in areas where the water is deeper and less disturbed, there’s less of these methane bubbles coming to the surface. In areas where the water is more shallow or more frequently disturbed, there’s not enough weight (from the atmosphere or from the water itself) to hold the bubbles in, so emissions increase.